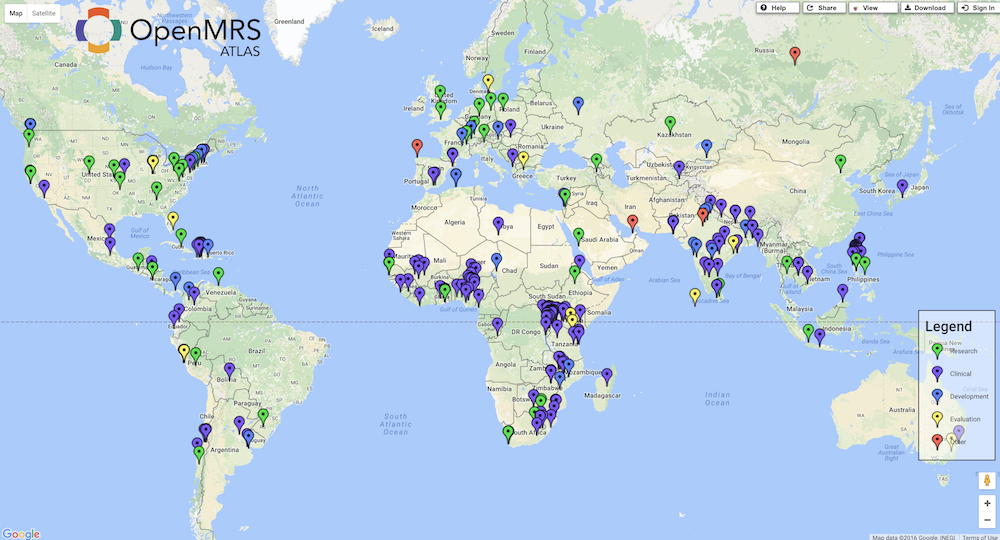 Today, the OpenMRS community is a widespread network of dedicated individuals and groups focused on improving the state of medical care in developing countries. As Health IT projects go, we're really big!

As a developer, you are about to become a member of this worldwide community dedicated to improving global health and saving lives. You'll make health platforms that create global synergy and join a vibrant and welcoming community. In this chapter, we'll explore who we are and where we're going.

Where And Who We Are

As you can see in the map above, you can find OpenMRS is use all around the world. For an interactive map built with data from some of our implementation sites, visit: https://atlas.openmrs.org

Users, implementers, developers and contributors come from a wide variety of backgrounds and interests. We collaborate, cooperate and communicate in different ways, but we all gain from and share in the work of others within our community.

With over 50 active projects, the OpenMRS developer community is a vibrant and thriving group of dedicated people working from around the world. The code we produce is used in hundreds of countries in different ways. From research labs in the United States to mobile clinics in Nigeria, OpenMRS acts as a platform for improving the health of citizens in numerous countries.

Not only is OpenMRS used in many different places, it's also being used to meet many different needs. In Kenya, it is used to support health care delivery for hundreds of thousands of patients at a network of over 50 clinics--some connected by typical networks, but many where the connection requires offline synchronization to external storage that can be physically transported between sites! Another NGO uses a central OpenMRS server connected to clinics in multiple countries via satellite Internet connections. In Malawi, creative individuals with a talent for technology have created a mobile cart running OpenMRS that physicians roll around their clinic, interacting with the system using a touchscreen. In Rwanda, the national ministry of health has worked to roll out a connected national health care system using OpenMRS. In the United States, OpenMRS is used to track patients at large sporting events, for mobile providers of health care to homeless people, and as a personal health record that allows cancer patients to share treatment and home health care information with caregivers and family members.

The Future of OpenMRS

At this stage, OpenMRS requires a fairly sophisticated team of implementers to install and run. The most recent releases of OpenMRS and current development is focused on creating "ready to go" implementations that would allow more clinic sites to take advantage of a sophisticated, scalable EMR without needing the expertise to support and maintain it at a low level.

OpenMRS is backed by a data model driven by a concept dictionary, allowing for the collection of coded, reusable data without requiring changes to the data model. Because the platform is not based on a disease-centric data model, it can be adapted for use in tuberculosis, malaria, or more general medical care.

Furthermore, we also promote the implementation of health data standards which enable the convenient exchange of medical data. OpenMRS supports the generation and consumption of HL7 messaging, the most commonly used health data standard for exchanging information. This allows external systems to communicate and exchange medical data in a more coherent manner.

Integrating With Other Systems

In line with recent efforts to improve the meaningful use of healthcare, OpenMRS has actively pursued methods to enforce connectivity between piecemeal health IT implementations. On these grounds, we have encouraged the creation of modules which enable OpenMRS to interact with other related systems.

Additionally, OpenMRS is also involved in efforts to promote the development of regional and national level Health Information Exchanges (HIE). This initiative sees the collaboration between multiple health applications to enable connectivity between piecemeal implementations. In this capacity, OpenMRS been adopted as the Shared Health Record (SHR) of the openHIE collaboration initiative emerging to assist in the strengthening of national health information exchanges for the underserved.

Where You Fit In

We're constantly working with new technologies for stability and performance. We strive to create the best software for health IT around the world, and we want you to help us get there! Now that you know all about who we are and what we're doing, the rest of the book will help you understand the technical aspects of OpenMRS and how to get started coding!